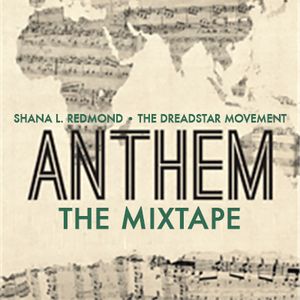 Anthem reveals how this genre, emblematic of Black solidarity and citizenship, contributed to the growth and mobilization of the modern, Black citizen. Tracing key compositions and performances—from James Weldon Johnson’s “Lift Ev’ry Voice and Sing” that mobilized the NAACP to Nina Simone’s “To Be Young, Gifted & Black” which became the Black National Anthem of the Congress of Racial Equality (CORE)—Anthem develops a robust recording of Black social movements in the 20th century.

This mixtape is a soundscape for the book, allowing for Black life and history to be displayed and contested through sound. Highlighting the songs analyzed in the text, as well as other relevant songs and speeches, the mixtape provides a sonic context for the complex reading of racial and political formations performed through the analysis of the composition, performance, and uses of Black anthems.

This book, while successful on its own terms, in tracing and giving us a rather straightforward concept of “the anthem” as political practice, or as a form of societal resistance throughout the 20th century, is perhaps not able to account for what, on my reading, is the most radical form of music emerging from what Redmond calls the “Black World” today, what might be still provisionally called “Gangster rap”, by which I mean particularly its “drill” and “trap” sub-genres. This is to say her concept of the anthem cannot adequately account for their emancipatory potential- which I read as their relationship to critical negativity. Her insistence on the notions of establishing a collective and identity-formation as the strong moments of potentiality in the anthem- which she claims can be evidenced even in “the last black anthem of the twentieth century, “Fight the Power”, by Public Enemy, fails to account for the way that my reading of this genre, gangster rap, in its most extreme forms, has developed increasingly into a form of representation which captures a collective set against itself, the model of our larger form of dominant social relations, as well as it responds to her demand or desire for a world “where it will be safe to be different” articulation that this cannot emerge through the mere formation of an alternative identity, but in the call for its absolute negation, namely, the negation of the commodity form which dominates all possible subject positions that can emerge in modern society universally (Redmond 19). In this sense, I would argue that the anthem, on her definition, as a form of a straightforwardly political text either in an organized or unorganized context, in a moment when politics has failed us collectively in the absence of a international workers party pursuing the collective realization of socialism), is not an adequate category for measuring the revolutionary or utopian potentiality of music in the “Black World”.

Redmond is right in the conclusion to show how the music of Public Enemy “reviles an uplift mission in the service of congealing and rallying an already powerful public of the disinherited” (Redmond 266). This seems vulgar though, in that while it can account for poverty and inequality as soci0-scientific category, it cannot respond to abstract forms of social domination- the fact that human labor power remains our form of societal wealth. While Public Enemy contains within it a message for the “dispossessed”, through allegorical interpretation we can read modern artists such as Future, through his figuration of self negation through wreck-less drug use, and Chicago’s teenage gang bangers relationship to self negation as enacting the hits and gang murders forewarned or threatened in their songs as a call for overcoming and negating/transforming modern society universally as an extreme form of societal representation, the (messianic) demand that we must lose ourselves totally in order to gain/win ourselves. Blackness or authentic difference exists on the other side of capitalist social relations as a positive concept. In other words, the political potentiality for rap today, on Redmond’s reading, appears within the frame of a false contradiction, either songs must provide strong articulations of political imagery, or they are “politically vapid” and therefore not radic (Redmond 275). Perhaps the most radical political promise exists in work’s today that appears least “political” on the level of ‘intentionality’–when “politics” has failed. Could what Redmond classifies as “politically vapid” rap – in its figurations of self negation and violence (when read allegorically in a doubled sense) serve as a reminder of the need for negating limited identity politics movements and serve as the precondition for a real politics of freedom.