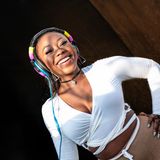 Never miss another
show from DjButterr

Dj Butter got her start in Houston TX, USA while she attended the University of Houston. She was so intrigued by the art of DJing that she took it upon herself to learn how to DJ on her own. Being self taught required a lot of dedication, patience and resilience which she invested in the art until she persevered. She took to the turntables like a natural.
As a young female DJ in Houston TX, lots of opportunities opened up to her. Butterr got to play at various clubs and events in numerous cities across the United States including New York City, Chicago, Dallas, Indianapolis, Ohio, and Maryland to name a few. She was also the resident DJ at the popular international night cub in Houston called Zanzibar. She played at the Houston leg of the Wizkid U.S. Tour at the Houston House of Blues and after that came the Flavor and friends Concert which she Djd at Ayva Center in Houston.