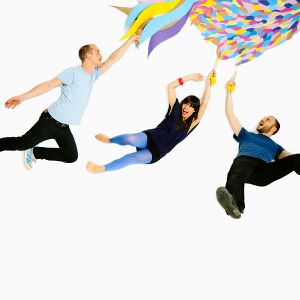 MARBERT ROCEL
The duo consisting of Marbert AND Rocel is a trio to be exact: Marcel Aue (producing, DJing and mixing), Robert Krause (producing, DJing and artwork) and Antje Seifarth (Vocals) have always know how to melt down the ears and the sneaker soles of their fellow Thuringians with their House-Jazz-Frickel-Elektroniko-vinyl-tinned-music-performance.
Marcel Aue aka DJ Malik is spinning records as hiphop DJ since about 10 years and is part of the German pop-funk-rap crossover act Clueso, whose records “Weit Weg” and “Gute Musik” were coproduced by him. Robert Krause studies graphic design and responsible for the artwork of the single and all other Marbert Rocel releases. The vocalist Antje Seifarth (called „Spunki“ by her friends) was backup singer of Clueso and the jazz project Rhythm Club.
After their debut album “Speed Emotions” Compost released their second album
“Catch A Bird” in autumn 2009...