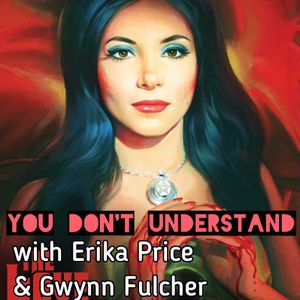 Journey into the pastel-colored world of twiggy goth witches with this week's episode of You Don't Understand! Erika Price stumbled onto the singular 2016 film The Love Witch and knew they had to share it with as many people as possible, and Tom & Gwynn Fulcher were happy to be first in line. The Love Witch is an arch, ridiculous comedy but also super tragic feminist tale of the destructive power of the patriarchy, but also the protagonist pees in a jar?! IT'S A TRIP! Listen as Tom marvels at the head-shapes of all the male actors, Gwynn bemoans how heavily kneeling features in pagan covens, and Erika channels a faded-as-hell 60s English professor. CHECK IT!

More from You Don't Understand Podcast