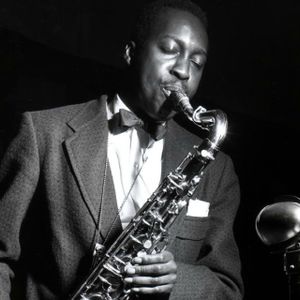 “Hard bop both needed and got a kind of second wind in the early sixties, and this had something to do with Ornette Coleman’s rejection of conventional chord changes, but it had far more to do with developments inside the school: Miles Davis’s Kind of Blue, Coltrane’s evolution, and the influences of Thelonious Monk and Charles Mingus. These developments rescued hard bop from its own formulas, emboldening its young practitioners to cut loose and to expand what the school could encompass emotionally and formally.” – David Rosenthal

Over the next four hours of Jazz at 100, we’ll be featuring tenor players and trumpeters who propelled hard bop into the 1960s. In this hour, we will start with tenor players JR Monterose, LA-based Harold Land and Teddy Edwards, and Blue Note’s most prolific player Hank Mobley.

That Vee-Jay 'Love Letters' is a live date? If so, that's part of a Charlie Parker memorial concert with Jodie Christian on piano & Nicky Hill on tenor, which you should check out in full, especially their take on Bird's 'Klack..'. Cheers, DrJ

Yes, that's the gig. It comes from a Vee-Jay collection. I'd love to catch the rest of the Ira Sullivan set. Do you know if the LP "Bird Lives" has been released digitally? I can't seem to find it.

OK. So there are plenty of vinyl versions 2nd hand, but that's only a fraction of the concert. CD is not available so far as I can tell. But Amazon is offering the full concert (2 CDs worth of material) in mp3 form. You can screen the whole deal on Spotify to see if you want to own it.

And there are 2 obscure masters here too: multi-instrumentalist Ira Sullivan (trumpet on the Monterose) and the even more obscure Dupree Bolton on 'The Fox' with Harold Land. Here's a link to the Bolton story..
https://www.thejazzarts.org/blog/obscure-trumpet-masters-dupree-bolton/
Enjoyed as always......Cheers, DrJ

Wow! Thanks for shedding light on these two. I knew nothing of the sad circumstances of Dupree Bolton. I'll have to search for the Curtis Amy set. I am only slightly more aware of Ira Sullivan's work, which needs further attention as well. I'm listening to "Love Letters", a lovely ballad he recorded with a quintet on Vee-Jay in 1962. Thanks so much for the tips.