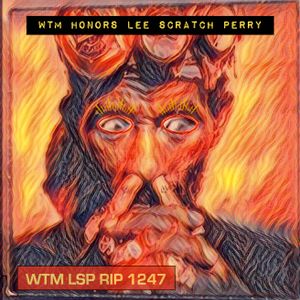 This show was 42nd in the global dub chart.

LEE SCRATCH PERRY is a huge influence, altering WTM production through his freedom to mess & sample, creating his multi-barbed sound system, audio-psychedelia. His madness presenting a hypnotic alternative fractured cognition that mirrors our present over-amped reality. I experience him less as a man with a timelined bio than as an inspiring energy field. His sound is my sound. & so for WTM 1247 I’ve chosen a non-logical-non-linear approach to his 60-yr legacy of nearly 60 LPS & countless singles, inspiring people globally. I prefer to float in his turbulent sea. I came to LSP via On-U Sound, which I spun on early WTM @ WFMU & Radio Libertaire. So LSP & On-U are menmonic milestones defining key life periods. But he never tires since his music is both basic & dense, joyful & fretful. I end with LSP’s goodbye serenade to his Swiss “cow-angels,” singing & yodeling along to the clanging cowbells. LSP is then, now & eternal.

LSP in Audiometric every year since 20 + - Never forgotten. I will still do a homage with Sounds Around records later this month to compliment your excellent shows. merci WTM ! Amdam.