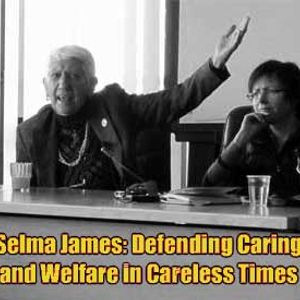 Selma James recently came over to Ireland to do a speaking tour in order to launch her most recent book: Sex, Race and Class--the Perspective of Winning: A Selection of Writings 1952–2011. Here she talks on 'Defending Caring and Welfare in Careless Times' at a meeting for the School for Social Justice in UCD.

Selma James founded the Wages for Housework campaign and was the first spokesperson for the English Prostitutes Collective. She has been has involved with anti-sexist, anti-racist, anti-imperialist campaigns from a very young age. She was born in Brooklyn, New York and as a young women she worked in factories and was a full time housewife and mother. In 1955 she moved to England, where she married writer and historian CLR James. Since 2000 she has been international co-ordinater of the Global Women's Strike.