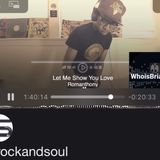 Never miss another
show from WhoisBriantech

1st Ever Brian Nance Official Release was June 6th 2011 The Release Name was a track that was signed By a very influential Pioneer of House Music and we’re talking about Chicago’s Own Jesse Saunders. He signed Brian Nance official first release track called Da Mental Groove under the alias Briantech. This track was on Jesse Saunders Above the Clouds Compilation series https://www.beatport.com/track/da-mental-groove-original-mix/1990487. Brian Nance wasn’t finished there he than went on and and started his own Deep Tech House Dance imprint Tech22. While putting out some cool EPs along the way such as Da Rise Of Tech22 and others such as Deeperside of Tech22. And later as he progressed Brian Nance put various EPS out on other labels such as Nightscopedeep Recordings were a few Brian Nance’s EPs were notably mention on Spirit of House Soulful Deep House Reviews early on the Release Elevated Levelz EP http://www.spiritofhouse.com/reviews/music-reviews/review180115.html