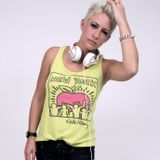 DJ/Producer Whitney Day is a classically trained musician-turned party-rocker leading the pack of a new generation of DJs. As quickly as she's launched her career in the NYC club scene, she's built a name for herself as a music taste-maker across the US and internationally. Armed with an exploding fan-base, coveted residencies and an impressive gig list (including Cielo, Barclay’s Center, Pacha, Marquee, Tenjune, Hudson Terrace, Soho House, Avenue, Greenhouse, PH-D and more), Whitney is just getting going.

With an instinct for reading the crowd and an ability to artfully mix genre-blending sets, Whitney refuses to be pigeonholed into any one category. From underground Brooklyn warehouses to international music festivals to tropical circuit parties and celebrity studded benefits, she knows no bounds.But most importantly, it's her infectious passion for mixing music and performing on- the-fly sets that keeps the vibe fresh and energetic every time.