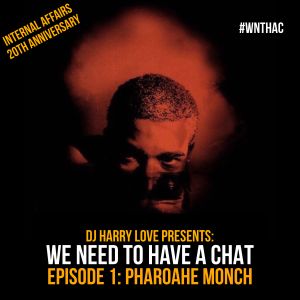 This show was 25th in the global interview chart.

WNTHAC Episode 1: Pharoahe Monch
For the first episode of 'We Need To Have A Chat (WNTHAC) Harry Love visits his favourite rapper/mc/producer Pharoahe Monch to discuss the creative process behind his most seminal works, the history behind how he developed his craft and became the artist we know today.

October 19th 1999 saw the release of his debut solo effort named "Internal Affairs" and on the 20 year anniversary Harry has the honour of releasing this inspiring conversation between 2 avid Hip Hop fans/artists/friends.

We hear a detailed account of Pharoahe transitioning from early demos & recording experiences with late influential producer/engineer Paul C and their time at 1212 studios, progressing through history & process of Organized Konfusion's Equinox album.
Monch takes us through his mindset going from being a "team player" in a 2 man group with fellow MC Prince Poet, to his challenges & realisations in becoming performing & creating now as a solo artist.

Glad this podcast series has started, Harry. Looking forward to this first one.