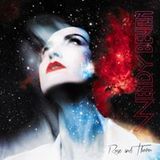 Wendy Bevan is a Singer, Lyricist, DJ, Visual & Performing Artist & Photographer expressing her ideas through a vast array of media that spans musical performance, film, visual imagery and immersive, experiential artworks. She is a visionary that strives to maintain a multidisciplinary approach to her work.

Residing in London but, often travelling and working between Paris and Milan Wendy has exhibited and performed as a solo musician/artist, throughout the UK and Europe.

She is currently working on her first solo album, which will be launched later in 2015, and continues to DJ a mixture of gothic avant garde, dark wave, ambient electronic beats, drone, neo-classical and post-punk music, wherever and whenever possible. Watch out for one of her songs 'Hanging on the Wire' to be featured on the new Reg Traviss feature film Anti-Social, which will be released in May 2015.