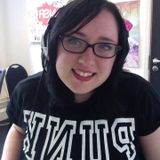 PK cut her teeth at Newcastle Student Radio (NSR), starting as a presenter in 2011 and finally being elected Station Manager for 2013/14, the year that NSR hosted the 2014 National Student Radio Conference and won Best Student Media at the NUS Awards.

From there she moved to presenting shows on Radio Tyneside and internet station A1 Radio as well as DJing at club nights around Newcastle.

In 2016 she was selected to be Voice of the Student Radio Awards and in 2017 launched N.E. Thing Funny.

This Mixcloud account brings a variety of PK's work together, including some one-off broadcasts and special podcast-only recordings.