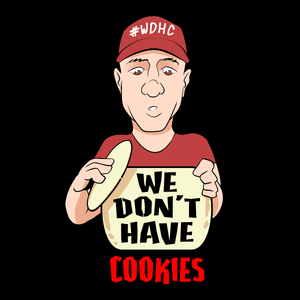 Jason starts off by apologizing that there is no big show like he had been hyping up all month because he was too sick to prepare one. Mama Kate stops by to talk about how disappointed she is that there is no show and they talk about all of the things that they would have talked about if there was one. Dan Severn says hello. There's a song by the Arrogant Worms called "History is Made by Stupid People". Then Dave Nelson calls to talk about a new segment that they were going to announce today if there was a show. Mike Canestaro says hello. There's a song by Barnaby Griffin called "They're Getting Earlier Every Year". ChooChooStu calls in to say hello. There's a quick skit by the Arrogant Worms called "No Sale/No Store". Then Kenny Bolin calls in to yell at Jason for not having him on the show which he may or may not know was recorded.  Wanna contact the show? Send an email to jason@wedonthavecookies.com or call 929-266-9342 and leave a voicemail. Like the podcast's Facebook page by clic