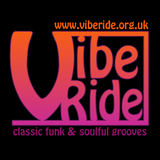 Never miss another
show from VibeRide

10 years of bringing you the best funk & soul! You can also find VibeRide on iTunes and Google Podcasts.

Since its inception in 2009, VibeRide has become a popular non-commercial funk & soul music show, and its accompanying YouTube channel, which features unique live footage of many of the world's best jazz-funk acts, has become one of the most visited of its kind. VibeRide videos have been used by chictribute.com, Z Records, and appear on patricerushen.com