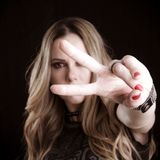 Brazilian, born in São Paulo, Vanessa Storck, aka “Van Storck ,” dedicates her life to music for 14 years as a DJ.

In her first year as a DJ she participated in a competition, of which she was the winner, and secured her place in the casting of one of the largest agencies of artists in Brazil, at the time Plus Talent, where she remained for 8 years.

In her country, Van Storck performed from North to South, playing in all the main clubs, among them: D-EDGE (São Paulo/SP) and Green Valley (Balneário Caboriú/SC).

With a solid national career, the artist has expanded her performances to foreign solos and has been on tour in 6 countries, among them: Argentina, Paraguay, Uruguay, Mexico, Portugal and USA.

In her longest tour (40 days in Portugal,) the DJ played in more than 18 Lusitanian clubs.

Among the hottest clubs in which she has performed internationally, we can highlight: Pacha Club, Sobremonte Club, Avalon Hollywood and Exchange L.A.

And, during this trajectory as a head