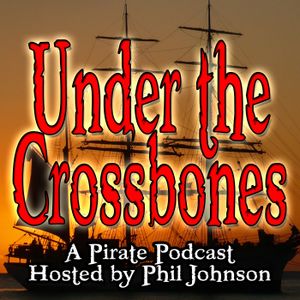 063 - Pool Pirates Filmmaker Erikka Innesby Under the Crossbones - The Pir

For extended show notes and more pirate goodies, visit www.UnderTheCrossbones.com     Erikka Innes is a comedian and filmmaker.  A few years back she made a short film called "Pool Pirates" that I was lucky enough to be in.   The film is about a crew of pirates that have lost their ship and take over a suburban backyard pool.  Very funny! We talk a lot about the indie filmmaking process in this one and the learning curve of a first time filmmaker.   Plus comedy from Erikka Innes herself and a great song from Barbar O' Rhum called "Coeur de l'Ocean". Today's show is sponsored by: Pirate Radio of the Treasure Coast - The best in pirate talk and music! Get to listenin'! Lifelock - Don't let the modern pirates steal your identity. 10%off a Lifelock Membership. Important Websites: Xander Kent of Blackbeard Banners - http://blackbeardbanners.storenvy.com/ Erikka Innes: https://twitter.com/nerdgirlcomedy Barbar O'Rhum - http://barbarorhum31.wixsite.com/barbarorhum You can get my latest

More from Under the Crossbones - The Pir