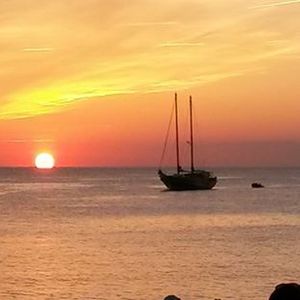 The mid 80's. A small yet influential island in the Balearic's was hosting club nights where the DJ's were playing down tempo tracks across many genres and pulling off eclectic and legendary sets unique to the island. Many tracks were British, and American pop tracks given a new life by DJ's who were setting the benchmark for cool. Add hand picked Spanish folk music, remixed for the dance floor and the music took on an almost spiritual nature.
Each night as the sun set clubbers would flock to a small bar in San Antonio to catch the suns dying rays - a moment that would signify the start of the hedonistic night that was to follow. Legends like Alfredo and Jose Padilla would dig deep into the vaults of European popular music to find nuggets often overlooked by clubs in the UK and the rest of Europe.
That bar was and is to this day is Cafe Del Mar. A name synonymous with cool. A bar and night spot famed for chilled out bar grooves , with the odd curved ball thrown in for good measure

Cheers did you meet with aydin jacqui ollie and the mob?

Thanks - I'm just pulling the tracks together for a second installment

it really is the dogs balearics , Nice work mate

Cheers mate - I have the next one in planning.

Cheers mate - it's the sort of mix I would expect from you in many ways.