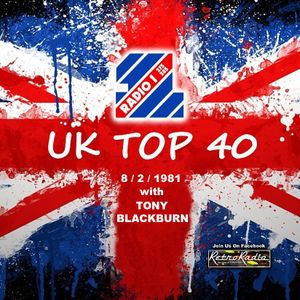 This show was 57th in the global pop chart.

Thanks for uploading. On another subject, I've got this thing where I'd really like to hear Southern Freeez by Freeez on a Radio One Top 40 countdown. But the incredible thing is that, despite all the uploads on MixCloud so far, none of them seem to include any of the weeks from February or March 1981 when it would have been played. It is on one of the "fake" top 40 countdowns, but I'd like to hear it on one of the real shows with Tony Blackburn (or whoever might have been standing in for him).

Michael, i deleted your request to join the group by accident........ please request again

Great show. I had two thirds of this show before so it is super the now have the full show. Tony is one of the greats and to hear he is coming back to R2 is good news. it would be nice for Gambaccini to concede Tony is better at Pick of the Pops so he could get his rightful show back. Thanks for the upload.

tony was good at presenting the chart and was great on POTP. he is to return to R2 in jan 2017