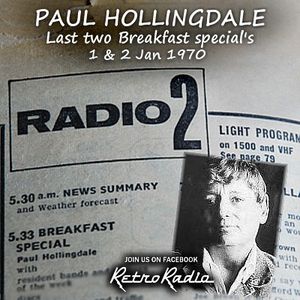 Marmalade, BJ Thomas and The Archies.

Here are two very historic recording's of Paul Hollingdale's last two show's on Radio 2. This recording begins when the 1970's are just 5 hours and 16 minutes old on Thursday the 1st of January 1970 and don't forget at this time New Year's day was not a bank holiday ! so on that Thursday it was "just" another day at work for most people. The following day, Friday the 2nd of January was Paul's last show and that recording begins half way through this upload when Big Ben chimes are heard.

For more great radio from the archives please join us on facebook at .......
https://www.facebook.com/groups/retroradiogroup/

I remember Paul Hollingdale opening Capital Radio at 5am 16/10/73.
He also opened Radio 210 Reading in 1976.
Here he had to be more reserved as R2 then was aimed at the more mature ausience, the younger listeners were listening to R1.
Thats all we had in 1970 folks , apart from Radio Luxembourg .
Mind you though, despite the marines offences act closing the pirates, we did have RNI, which catered very nicely for Rock Music Fans and i believe it started later in 1970 from the Dutch Coast.
Of course Caroline was still around, though i am not sure if it was on the air at this time.
It was nice to hear dear old Ray Moore at the beginning , What great news stories too.
In those days Medium Wave or Long Wave ( AM ) ruled, though VHF ( FM ) Stereo was gradually being rolled out across Britain and was to become the New way of listening.

interesting listening. I was around at that time and would like to point out that in 1970 new years day was just an ordinary working day. it didn't become a holiday until we joined the EEC ...Now that's an interesting thought for brexit !!!

Thank you Stuart for a fascinating recording. It's interesting to think what Wonderful Radio London would have been playing at this time of the morning had she survived with the other Offshore Stations! It has a certain charm though and reminds me of simpler times.

Glad you enjoyed it Glyn, yes BIG L was going to defy the government too initially but Alan keen was told if he did that it would ruin the careers of the DJs and he gave in. A shame because unlike Caroline London was properly run and made a LOT of money. Caroline only came off air in March 68 because it was bankrupt and towed to Holland by the receivers. I doubt that would have happened to Big L..... I think radio One would have failed miserably had London still been broadcasting

Brilliant recording.what a consumate professional Paul was/is.
Does anyone have any David Symonds on Breakfast special.

paul hollingdale was also known on Radio Luxembourg but in broadcasting thats another story.

The best uploads on mixcloud yet. Brilliant stuff. Hard to believe someone was recording at this time of the morning.

This is a wonderful recording and brings back some memories of my very first radio which I actually did not get until Christmas of 1970. Note that whilst this Paul Hollingdale Show is a Radio 2 programme, the one before with Ray Moore was listed as being a Radio 1 show even though it played mostly music more associated with Radio 2. Nice gale warning at the beginning, and some very interesting news stories too. Thank you for uploading this.

Yes the Mckay kidnapping case is quite a famous one. Pete Murray and Kenny Lynch in the new years honours list and some great music from a begone age. There simply isn't radio like this ANYWHERE any more !