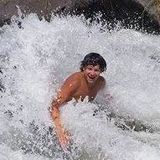 Communication (in dub)
by Tui & La

The Dream Foundry
by Tui & La

Becoming the Frog
by Tui & La

Dance of the Menehune
by Tui & La

Tui, also known as the Moon Spirit, is one of two spirits that reside in the Spirit Oasis at the North Pole within the Northern Water Tribe's capital city, taking the form of a white koi fish with a large black spot on its head. Together with its counterpart La, Tui was among the first spirits to come to the mortal world, and the pair have kept balance ever since in an eternal dance of push and pull. As the Moon Spirit, Tui was the first waterbender and the root of all waterbending; in the event of Tui's absence, waterbenders lose their bending ability.

"The legends say the moon was the first waterbender. Our ancestors saw how it pushed and pulled the tides and learned how to do it themselves."