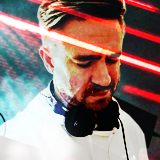 Fell in love with acid house and electronic sounds in '88.
Obsessed with the old school house, electro, and deep, trippy new sounds.
Bought my first acid records in 1988 from City Sounds in London, came back with some absolute gems; Moody Boys - Acid Rappin, This Aint Chicago - Ride the Rhythm, Kraze - The Party, to mention but a few.

Bought my first mixer from a mate at school (he got the best deal) which I rigged up to 2 old belt drive decks which pissed my dad off no end! 😀 Eventually managed to hustle and scrape enough cash together to buy a set of SL1200's.