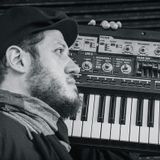 Never miss another
show from TRZ

Fernando “TRZ” Falcoski, musician, keyboard player, music producer and sound designer. He began acting in independent music in the early nineties in the interior of São Paulo, with the band Mercado de Peixe, and as a music producer of the label/collective Samacô.

Currently lives in São Carlos-SP, in the country side of São Paulo state, and integrates the band Liniker and the Caramelows, and also released his solo work.