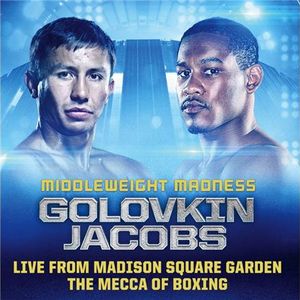 There's plenty of boxing on tap to keep boxing fans and media busy, but the first order of business this weekend is the middleweight skirmish between Gennady Golovkin vs Daniel Jacobs.

For some, this fight represents the first time Golovin has faced a puncher skilled enough to meet the Kazakh's fire with fire of his own. But others believe Jacobs will wind up simply becoming another victim of Golovkin's ferocity. Though it may not be deserving of Pay-Per-View, it's a competitive fight on paper and will almost certainly end early.

It may be worth spending a few clams to catch Roman "Chocolatito" Gonzalez in action, however, as he takes on Srisaket Sor Rungvisai on the PPV undercard.

But also on the menu for Brin-Jonathan Butler and Patrick Connor is the awful knockout David Lemieux scored on Curtis Stevens last weekend.