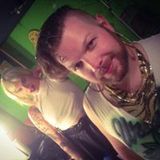 Long before he dropped his first track, Tony Burns has been an animated and vigorous participant within the local dance music scene! Since 2009, he has worn such hats as promoter, dancer, and staunch supporter of the various incarnations of Northwestern club and party life, from Portland to Seattle. He has become a fixture within Seattle's queer renaissance of style-savvy, culture-carving innovators.

His style, thus far, ranges from pop-nouveau meets dirty electro, mashups, hip-hop and everything including the proverbial kitchen sink. Catch him around Seattle at one his various residencies like The LumberYard Bar, Bacon Strip, and The WildRose Bar.