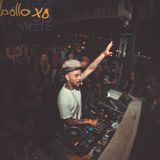 From playing sold out shows at some of the country’s most popular nightclubs with Artists like Drake, Diplo and Arctic Monkeys to playing star studded celebrity birthday parties for the likes of Leonardo DiCaprio & Toby Mcguire to shutting down festival stages Apollo has quickly became a premier Open-Format Dj. By the time he was 20 Apollo had become Western Michigan Universities Game-Day dj for their football team and was dj’ing in Stadiums for 30K+ people, By the time he was 21 he was headlining some of Chicago’s premier nightclubs with his signature fusion of Hip-hop, funk, Electro, house, latin & rock.

Currently Apollo plays upwards of 200+ sets a year and holds residencies at Studio Paris (Chicago), Underground Nightclub (Chicago), FWD (Cleveland) and Blind Dragon (Chicago/LA). Apollo has also caught the eye of corporate brands such as Leo Burnett, Red Bull & Windy City Live where he is a recurring guest dj. Through these connections Apollo has been able to create a massive