Asian protest movements navigate between an authoritarian past and a capitalist present. 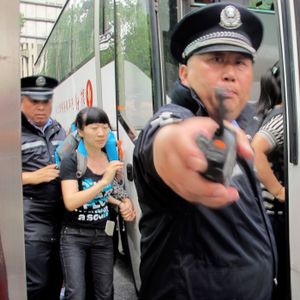 Asian protest movements navigate between an authoritarian past and a capitalist present.by This is Hell!

East Asia analyst Brian Hioe reports on two mass protest movements in Asia - one environmental in Shanghai, one constitutional in Tokyo - and explores the challenges to social movements in a region of one-party governments, a political legacy of Cold War authoritarianism and the consuming force of trans-national capitalism.

Brian wrote the recent articles How Could A Demonstration of 50,000 in Shanghai Not Be Reported in International Media? and Article 9 and Japan’s Democratic Crisis for New Bloom.

Jeff Dorchen was just minding his own business, posting anti-infant propaganda on his Facebook wall, when everyone got all mad. So he balls his lil fists, quivers his tiny lips, and unleashes against all the babies on Earth.

More from This is Hell!