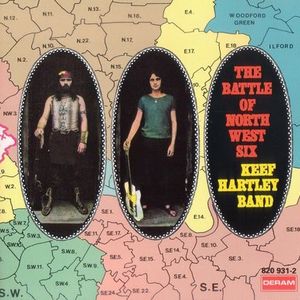 Keith "Keef" Hartley (8 April 1944 – 26 November 2011) was an English drummer and bandleader. He fronted his own band, known as the Keef Hartley Band or the Keef Hartley Big Band, and played at Woodstock.
Keith Hartley was born in Preston, Lancashire. He studied drumming under Lloyd Ryan, who also taught Phil Collins the drum rudiments. His career began as the replacement for Ringo Starr as a drummer for Rory Storm and the Hurricanes, a Liverpool-based band. He then formed The Keef Hartley (Big) Band, mixing elements of jazz, blues, and rock and roll and the group played at Woodstock in 1969.
In 2007, Hartley released a ghostwritten autobiography, Halfbreed (A Rock and Roll Journey That Happened Against All the Odds) in which he spoke about his life growing up in Preston, and his career as a drummer and bandleader.
Hartley died on 26 November 2011, aged 67, at Royal Preston Hospital in Preston.