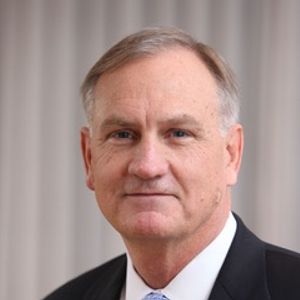 Chris served in the United States Navy for thirty two years. A Naval Aviator, he commanded two helicopter squadrons and two amphibious warships. As a Flag Officer he commanded Navy installations in the Republic of Korea and the five-state Mid Atlantic Region. His final assignment was as the Director of Ashore Readiness for the Chief of Naval Operations.

Since retirement from the Navy in 2004 Chris has worked as a consultant to private industry and the Department of Defense in energy, environment, facilities, and management fields. He now serves as President of the Navy Safe Harbor Foundation, and is chairman of the Board of Directors for the Military Bowl Foundation.

His wife Kathy and he reside in Vienna, Virginia.

Outstanding show!!!! Rear Admiral Christopher W. Cole, U.S. Navy (Retired), is a must hear his commitment and dedication as an inspiration to anyone who listens to this Workforce Show, hosted by James Thomas. Thank you to everyone who will take a minute to send a comment to James Thomas.

Every guest that host James Thomas has picked to give inspiration and enlightenment to anyone looking, or have a job, or just need guidance has been my mission to forward on to my friends and Facebook in the hopes that it will help someone who is looking or helping someone looking for insight into getting, or preparing for the ins and outs in this job market. Blessings to all. Carol Coles

More from The Workforce Show