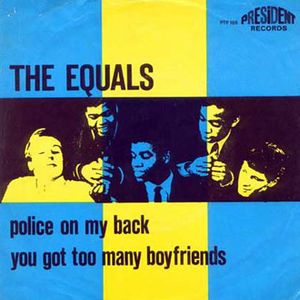 Band Feature: The Equalsby The Sixties

Considered a One Hit Wonder in North America - The Equals were anything but that in England. With A string of top 6 top 40 singles - including the #1 "Baby Come Back", The Equals, fronted by songwriter Eddy Grant, were trailblazers. Providing a unique blend of sounds - rock, soul, soca & sca and blending the lot together to produce some classic records. Some fun and dance-able, others heavy & topical. Listen in and explore their short but influential time in tn the limelight between 1966 and 1971.