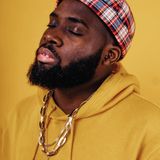 Never miss another
show from therealjulsbaby

Juls sites J Dilla and Kanye West as his idols. Over the years Juls has perfected his sound merging his African influences with different genres of music that have influenced him over the years. He has been dubbed as a pioneer depicting a minimalistic slow mellow sound to the modern afrobeats sound.