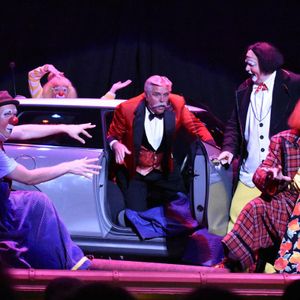 Today, the big top is gone and its celebrated performers scattered around the world but we’ve got two people with intimate knowledge of the back story of the circus.
We’re going to go back-stage during its glory days to see what it was like behind the scenes with the clowns and other performers. To do that we’ve got circus insiders, Greg DeSanto, who spent 35 years as a performing clown, producer, director, consultant and writer for circuses across the country. He’s the last celebrated producing clown from Ringling and is now Exec. Dir. of the International Clown Hall of Fame and Research ctr in Baraboo, Wi. and Dinny McGuire, a TV talk show host, who emceed and directed the Vaudeville Show at the Great American Melodrama and Vaudeville Theater, Dinny is a recent guest on our show and former Ringmaster with the RBB&B Circus.
Greg and Dinny, you each spent loads of time behind the scenes at the circus, is there a record for number of clowns coming out of a car?

More from The radio Buzz