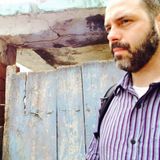 Never miss another
show from The Incredible Kid

Make Way for Punjabane!
by The Incredible Kid

InterHop 2.14 for PDX Fusion: Words
by The Incredible Kid

Panjabi, Please! (exclusive for Plasmodium.net)
by The Incredible Kid

Beginning with incorporating Asian Drum and Bass, Reggaeton, and Meren-Rap songs into his late ’90s house party sets, The Incredible Kid built his reputation igniting Portland, Oregon dance floors with the incendiary urban sounds of international dance music. In late 2000 The Kid introduced DJ Anjali to the dancing masses and the two spearheaded the Bhangra and Bollywood scene in Portland through their Andaz night founded in July of 2002; the longest-running party of its kind on the West coast. Alongside fellow DJ E3, the two initiated the Global Bass scene in Portland when they founded the club night Atlas in November of 2003 which had a legendary nine-year run. In 2013 Anjali and The Kid introduced their newest party: Tropitaal a Desi Latino Soundclash.