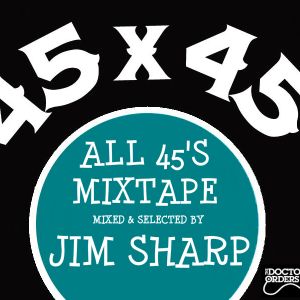 We got introduced to DJ/producer Jim Sharp (London, UK) through his incredible 'ATCQ Midnight Marauders Revisited EP,' coinciding with the 20th anniversary of the Tribe classic earlier this month. Asking him for a new guest mix was a no-brainer after listening to his nine A Tribe Called Quest reworks in heavy rotation.

"All 45's Mixtape" is a 40-minute mix made with nothing but (what's in a name) 7" records. Think of fresh material by J. Rawls, Action Bronson, Q-Tip, Little Brother, Marley Marl, Ohio Players, Otis Redding, The Fugees, Miles Bonny, amongst others.

Catch Jim Sharp live at The Book Club in London (UK) on December 7th together with DJ Format, Mr. Thing & Spin Doctor. It's an all-45's event presented by The Doctor's Orders: each DJ plays 45 of his favourite 45’s at this night ingeniously called '45 x 45'.

It's always nice to come across a mix with dope cuts. Cheers!

Great broadcast, Jim! As someone from Macon, Ga...Otis is always appreciated.

Show your support for the shows and music you love to listen to. Subscribe directly to this channel to become a supporting fan of The Find Mag and get access to exclusive rewards.

More from The Find Mag