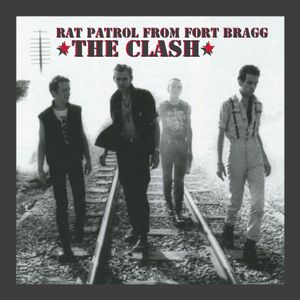 Before the Clash released Combat Rock, there was an album titled Rat Patrol From Fort Bragg. The initial draft was conceived almost entirely by Clash guitarist & songwriter Mick Jones. The bootleg recordings of the Rat Patrol sessions that would eventually surface years later reveal the proposed album to be not only superior to the actual release, but one of the greatest “lost” albums in pop music history.
I spent the last year working on what became this mixtape. Sourcing the tracklisting from various bootlegs to come up with the closest to what could have been Mick Jones double album. I wanted to leave Combat Rock as it’s own thing. I’m not a fan of that record - I find it a bit thin sounding & while there are certainly some fantastic songs on there, It never felt very cohesive to me. Still, I wanted Rat Patrol & Combat Rock to be two separate releases.
Anyway, I hope you enjoy my experiment with what should have been Mick Jones Vietnamese-reggae/narcotic-funk masterpiece.

I was able to fill in some of the missing songs or alternate versions by taking them off of the various Clash compilations and boxsets. Just recently (May 2021) I found some high quality rips of “Know Your Rights”, “Inoculated City”, “Car Jamming”, “Atom Tan” and “Death Is A Star” from the recently auctioned single Rat Patrol Masterdisk acetate! That made it possible for me to go back and replace the edits I had done with these much better sounding and better quality files. Lastly, and this is where I might get some blowback, I decided to use the Rankin’ Roger takes of “Rock The Casbah” and “Red Angel Dragnet”. I agree with the Clash/Joe Strummer in using the version of “Rock The Casbah” that appears on Combat Rock. It’s definitely the stronger and, I can imagine, more fun to sing version of the song. But like I said, I wanted this to be different from Combat Rock (as well as the Rock The Casbah single). As for why The Clash/Joe Strummer went with the absolute garbage version of “Red Angel Dragnet” from Combat Rock when they had this excellent version with Rankin’ Roger sitting around is beyond me. The quality of this version of “Red Angel” is not the best because I had to cut loops, lay them under and reedit the base track from the Combat Rock version together with a fairly crappy sounding bootleg of the Rankin’ Roger take.

“When the Clash went back into the studio to record their 5th LP they were not in good shape. Drumming prodigy Topper Headon was drawing ever-nearer to the rock bottom of his nasty heroin habit, while lyricist Joe Strummer and bassist Paul Simonon had re-hired their old manager as a means to wrangle the group’s increasingly unwieldy sound and image. Mick, the band’s only real and functioning musician, was both at odds with Joe’s desire to get back to basics and at odds with the manager’s desire to wrestle creative control from him. But instead of a compromise, Mick decided to go all in on his idea for a new Clash record. As the only one with producing and engineering know-how, there wasn’t anyone around to stop him… yet. Rat Patrol would essentially be Mick’s ultimate statement, a highly mechanized and expansive hybridization of New York funk/hip-hop and the jungly, reggae-inflected new wave of their Sandinista! days. Jones’ presented the “finished” product to the rest of the Clash and their label, and the reception was almost unanimously negative. Joe Strummer and manager Bernie Rhodes balked at the extended running times of several of the tracks, “Does everything have to be a bloody raga?!” Rhodes would famously say. CBS execs saw the album’s bizarre hybrid of underground genres as a threat to its marketability. Jones was outnumbered, and CBS hired former Who producer Glyn Johns to remix the album to a single LP. Jones was inconsolable. So upset that the rest of his band had so thoroughly rejected his work, he could hardly bother to show up to the remixing sessions hosted by Johns, often arriving hours late after several of Jones’ tracks had already been remixed. Several of Rat Patrol’s best tracks were removed outright, other tracks’ lengths were cut in half, verses were changed or left out, and samples and effects stripped away, the result of which is the final product Combat Rock.”
-PopMatters