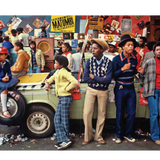 Never miss another
show from Asher G 'the Rocksteady Daddy'

Asher G was born in 1961 to Jamaican parents and raised in north London. His father was a tailor and the owner of a sound system called Count Wally the Mighty Hi-Fi, so their house was filled with records and music. Young George thrived in this environment and busied himself from an early age selecting records from his father's collection.
At the beginning of the 1980s, Count Wally gave up his sound system and presented George with his record collection containing many thousands of 45s. At a time when most reggae DJs were playing Upsetter and Augustus Pablo productions, Asher G was carving out his own distinctive style, selecting unusual instrumentals from Derrick Harriott and Harry Mudie, plus titles from the likes of Eric Morris, Glen Adams, Toots Hibbert and Jackie Mittoo.
In November 2008, Asher G was chosen by a sizeable crowd at a clash in north London. But he had already been considered by many to be the London reggae revive master for the previous 25 years.
Penny Reel 2011