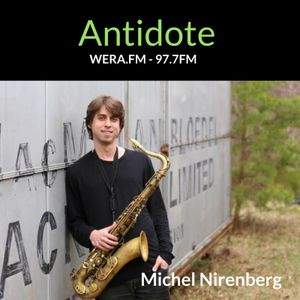 This show was 100th in the global indie rock chart.

Michel Nirenberg, Brazilian saxophonist returns to the DC area for a short tour. Well known to many afficianado's of Brazilian music in the area, Michel, completed graduate studies at James Madison University a few years ago and was a regular on the local gigging scene before returning to Rio. Great to chat with him and play tracks from his album "Portrait/Retrato"

Keeping up with the world music theme, some great vocals from Spain's Buika, and Canada's Hannah Burgé, plus an opening track from DC's own Laura Baron - featuring, incidentally, Alejandro Lucin (drums) who performed on Michel Nirenberg's album - small world! Plus tracks from the new album by the Blind Boys of Alabama and a great closer from Michael Franti & Spearhead.

Listen in every Tuesday at 9am and every Sunday at 4pm on WERA 96.7FM, streaming at wera.fm. Antidote broadcasts in the UK on Sundays at 5pm (GMT) in the UK on West Norfolk Radio.