by Talking Motorcycles with Barry
54:45 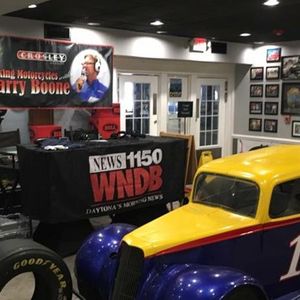 We go in depth with three of American Flat Track's biggest stars! Jared Mees joined us to talk about the pain of loosing the Title in 2016 and his thoughts on the season about to begin in Daytona on the Indian FTR750. Will it break? Is he ready?

Henry Wiles, National Number 17 is a TT specialist who has won the famed Peoria TT a record 12 consecutive times! Will he prevail in the first ever Daytona TT on a Kawasaki? What does he think about the design of the track and the impact on the riders of being under the lights in the tri-oval at the World Center of Racing!

Kenny Coobeth was very honest in sharing his thoughts about he season ahead riding once again with the Harley-Davidson Vance and Hines Factory Team on the XG750R after years of campaigning the HD XR750. Just a few short seasons ago he was considering retirement and now appears to have a new lease on life aboard the new water cooled XG Harley.

We were joined by Paul James, Product Portfolio Manager of the Harley-Davidson M

More from Talking Motorcycles with Barry