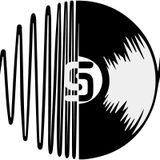 Never miss another
show from switchState

switchState started DJ life in 2011 with the purchase of his first Technics.
Predominantly a Drum & Bass turntablist his mixes include an eclectic variety of styles from right around the musical spectrum.