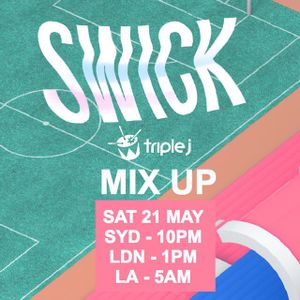 Swick triple j Mix Up May 2016by Swick

This show was 94th in the global club chart.

Swick is good at keeping the ball rolling. He makes music that makes other club stuff sound a tad boring. No dis to the others but Swick is a fiend for throwing curve balls that work incredibly well.

He's worked with some remarkable folk in the past - The likes of Diplo, Tkay Maidza, Nina Las Vegas, Astronomar, Douster and his good pal Lewis Cancut all must've had some influence on him; each has been setting the bar high in making and playing experimental dance tunes.

His new material is high gloss. He's paired those trinket synths with a new collaborator Eden xo's plastic vocals. It's unreal in all senses of the word. It's part of a new EP Stamina. It just dropped and hosts some amaze artists like Marcus Whale and Spank Rock.