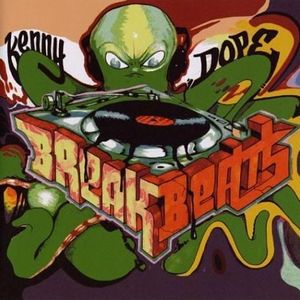 This show was 27th in the global beats chart.

In the words of DJ Ayres:

This Breakbeats CD is a reissued classic in the Bronx tradition of doubling hard funk, disco & early rap breaks with precision. The production is impeccable, and manages a lot of multitracking to keep it interesting, without sacrificing a live feel. But that’s just one level of appreciation; it’s a digging tape too. Everything is on here, from obvious “my first breakbeat” records (James Brown, Headhunters, Meters) to that james flames rare shit that djs like Language and Roctakon cream their panties over. And apparently he’s only rocking original copies, scratching the shit out of $200+ 12″ singles. 37 tracks total, with a couple of extended live remixes at the end and a lot of composition throughout (39 records are listed on the back, but I would guess he used more like 70-80 joints total). I know we hype a lot of music up in our reviews, but honestly, this is a desert island pick.