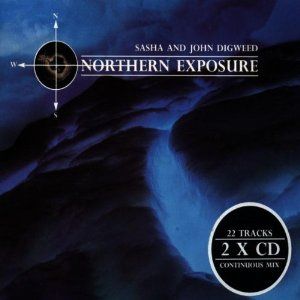 Keiichi Suzuki, Future Sound Of London, The, Young American Primitive, God Within, Rabbit In The Moon and more.

Northern Exposure is a 1996 mix album by DJs Sasha & John Digweed. It is their second mix album. There is both a British edition released by Ministry of Sound and an American edition released by Ultra Records in 1997. The British package contains both CDs, whereas the American only has the first disc.

The album is a concept album of tracks specially selected and mixed as two different "journeys", the first being the north journey, and the second being the south journey. The band's following mix albums are also concept albums.

The album is regarded by many as one of the best DJ mix albums of all time.[citation needed] It reached #7 initially in the UK Compilation Chart. In The Mix ranked Northern Exposure the 5th best mix album of all time in its list of the top 30 ever, saying it's "considered the pinnacle of Sasha and Digweed’s joint efforts, Northern Exposure confirmed the mastery of both DJs. It’s what every mix-CD wants to be: timeless

One of the best trance albums I ever owned… wish I knew what I did with it? Probably lent it to someone and never got returned.

The Everest of mixed album releases. North and South. Call it what you will... Trance, Progressive, Chill... whatever. 25 years on, it sits alone on top of the highest mountain..

This Was The Moment Where Twilo Redefined VIP and changed the raver image exclusively for a poweful brand For Twilo But, The Standard For The World

Been so long since I've heard this, crazy fucked up memories and absolute class!!