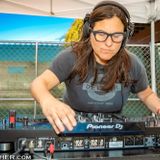 Stefanie Phillips’ is a veteran San Francisco DJ who has been working SF dance floors since 1986.