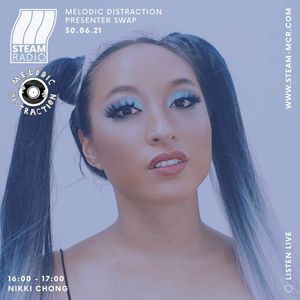 Breakthrough artist Nikki Chong has been just what the Liverpool techno scene needed. Hailing from the Gold Coast, Australia, Nikki Chong brings the sunny, high energy temperament to her music.

Having won a national DJ competition, she was given an opportunity to perform at Snowbombing festival, djing with the likes of Camelphat, Bicep and Eats Everything.
She then spent the next year perfecting her craft through her melodic house residency at the Gold Coast’s prestigious music venue, elsewhere.

Dreaming of something new, Nikki Chong moved to the UK to pursue her career further. Through living in Liverpool, she has started her own techno led radio show with Melodic Distraction and found herself on line-ups for Club Bad and The Wonder Pot, supporting legends in the game such as Fjaak, Dense & Pika and Melé.

Describing her sound as techno but fun, expect high energy and hypnotic sets. A full techno workout ahead.

Thanks again for having me Steam Radio :)

Loved it. Thank you

I'm glad you liked it Kelvin!!!