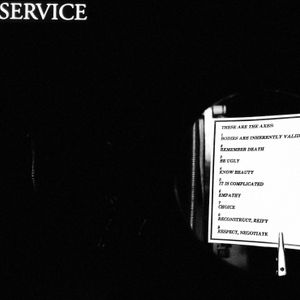 a going away present for a friend, and a love letter to the party he and some friends put on the last couple years at smartbar. service always feels like a magic trick. a club space arranged to make it feel smaller, more intimate, special early on. people start dancing earlier because they don't feel like they're alone on an empty floor that hasn't filled up yet. the end result was invariably a pressure cooker of early energy overflowing out into the rest of the space as they opened it up over the course of the night. it blew me away every single goddam time.

it might not be gone forever, but it's going away for now. so i made a love letter to the first two hours. the part of the night where the dancing is less of a concern than a mood, and then that mood settles into creating the heat needed for the pressure cooker.

never even been to SERVICE but nevertheless this mix got me all :,),,,

thanks for mixing sharing. what a lovely love letter.