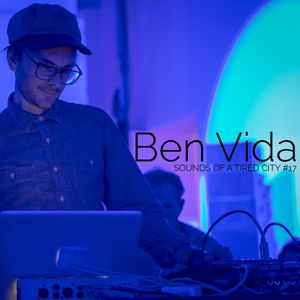 Ben Vida is a Brooklyn-based artist and composer who mainly works with electronic compositions that utilize analog and digital synthesizing technologies, with a focus on aural phenomena and sound localization. He has been an active member of the international experimental music scene for the past two decades with a long list of collaborations, bands and releases on labels such as PAN, Alku, Thrill Jockey, Drag City and Kranky. Just recently released on Shelter Press, his latest LP 'Slipping Control' was originally composed to act as a score, a sound piece and as raw data for electronic control source. We talked to Ben about his unusual rhythmic patterns and his interests in experimental music, which he also illustrates with a rather unconventional mix especially composed for Sounds Of A Tired City.

Tracklisting is quite loose: performer + album/collection title, various bits and pieces from here and there.