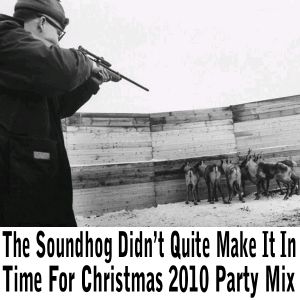 The original idea for this was to do a quick mix of some of the music I'd really liked in 2010, as an 'internet gift' gesture to all the lunatics who still give half a shit about what I do (or don't do, frankly). That idea didn't last long, as I soon realised new music in 2010 had almost completely passed me by. So I threw a few recent tunes in with a load of old ones, stirred it up overnight, shoved it into a limiter, and here's the result.

This is not 'Radio Soundhog 8', which will never exist. This is also probably the nearest thing I've done to a "regular dance music mix", so apologies to those expecting intricate cut and paste shizzle, but that's not to say that some bits aren't put together in a way that nobody else could. Or would want to? I've no idea. There are also nods to some people who left the planet in 2010 who meant a lot to me. Play it loud, play it drunk, but don't let the pips get stuck in your ears.

This is so brilliant, all the keys of the songs match, flows so well...and this is the outcome if you aren't trying so hard!? I love what you did with the Rheingold track, am amazed anybody else has even heard of it. I hope you have not given up and are still doing this sort of thing nine years later. Congrats and thanks for uploading!