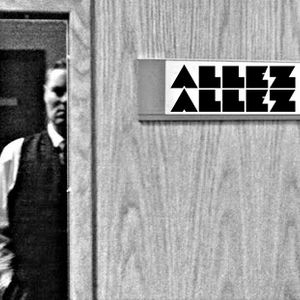 Uploaded here now, due to the imminent closure of the A-A website as they've split up to do their own thing(s). Two months after I appear on the site. I'm probably a fucking jinx... Anyway, I think this came out quite well, and had a couple of nice messages about it. Nobody's asked me to replicate it, do a DJ 'gig' or remix something trendy as a result, but I suppose I always expected that, deep down... pffff.

Original blurb: I asked the chaps at Allez-Allez if they'd like me to do something for their blog. They said 'yes', so I did. And it took ages to do. But it's done... It's an odd one, quite dark in tone which was probably reflecting my general mood when making it. A good head-nodder, though. If you like it, let me know, let them know and perhaps let other people know. Who knows, I might do another one at some point. Oi, stop laughing.

But I've got to question Creationism by Zappa - sounds nothing like the track of the same name on Lumpy Money. Or maybe you got it so far back in the mix it's hard to hear?

Lumpy Money Project - disc 3, track 18... it's in there, swamped in echo under 'Sequence', right until the last song kicks in!