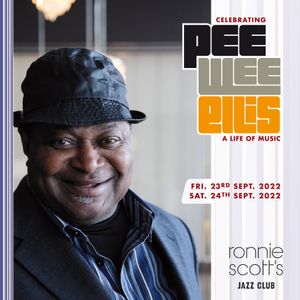 Pee Wee Ellis • The Spirit Of Christmas
The new bandcamp site is up!
https://peewee-ellis.bandcamp.com/album/the-spirit-of-christmas

Excellent show. Thanks for sharing. It was nice to hear Fred Wesley.

Thank you much Derek.

All I need now is a table for one at Ronnie's and a Margareta and life would be perfect......must have been an unforgettable experience to celebrate the life of such a remarkable musician together with all his compatriots & followers - thanks for sharing this.

Also known as 'the Man Who Invented Funk'; this was indeed a fantastic & diverse selection of tracks honoring a giant whose far-reaching legacy will continue. Many thanks TSP & Ronnie Scott's Jazz Club !!

Thank you! The performing artists (many of them from his first band at Ronnie Scott's) were fantastic, too. Here's how the the legendary Jazz Club introduced the shows in advance:
"Pee Wee first appeared at Ronnie’s in 1992, fresh from a tour with Maceo Parker, with what would be, the first incarnation of the Funk Assembly bands with Jason Rebello, Mark and Michael Mondesir. Since then, he has appeared regularly until his final appearance on the Ronnie’s stage in February 2018.

Come and celebrate his life and music with us.

We pay tribute to the man, the music and the playing with four special, celebratory shows, and what better way to celebrate the life and music of the great funk innovator Pee Wee Ellis than at Ronnie Scott’s with the musicians who worked with him and who loved him. Join key members of the legendary Pee Wee Ellis Assembly plus fabulous musicians and friends from the UK scene at this iconic venue, Pee Wee’s British musical home from home, to remember his amazing career of more than 60 years as trailblazing composer, arranger, producer, band leader and inspirational saxophonist.

Alfred James Ellis, later known as Pee Wee, joined James Brown’s band in 1965 and stayed until 1969, writing 26 songs with him. With his jazz and Brown’s R&B funk was born and their collaboration produced hits like Cold Sweat, Say It Loud – I’m Black and I’m Proud, and Mother Popcorn. He would then go on and collaborate with George Benson, Hank Crawford and Esther Philips. Another ‚funk‘ standard written by Ellis was The Chicken, famously recorded by Jaco Pastorius.

He would go on to be Van Morrison’s musical director and horn arranger and tour with him for over 20 years before his own group Funk Assembly was formed worked consistently from 1992 onwards.

He leaves behind a wealth of compositions, pioneering funk, a sound and playing that has influenced decades of other players and above all, memories of a lovely man.

Kevin Le Genre will be compering the evenings.

Photo of Pee Wee Ellis by The Soul Preacher (2018)

More from The Soul Preacher