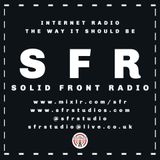 Never miss another
show from SFR

www.sfrstudio.com
Andy Lewis "Some of the best radio shows and DJs are on the Internet rather than yer actual transistor wireless e.g. this one"
Shoe Shine “thoroughly cracking show”
Jason Ramsey “Great show, one of your best”
Ian Vernon “loved the show”
Martin Gaughan “Fantastic show”
Ian Horton “great tunes top night “
Trev Symcox “The best show so far IMO – fantastic eclectic stuff. Respect”
Dave (@banditball) “sounds great, thank you for the great shows, addicted i am. thanks for making radio how it should be”
SFR’s owner, and a dj for over 13 years now, barnsley sime’s flagship four hour request show became an essential part of a lot of peoples weekends.
Sime is now doing a show on a on thursday from 8pm onwards (normally with a Friday finish).
been a guest dj at the London legs of March Of The Mods and hosted his own leg in Sheffield in 2015 and is bringing MOTM to Barnsley in 2016. he is also the resident main stage dj at the BWM Scooter & Ska Festival.