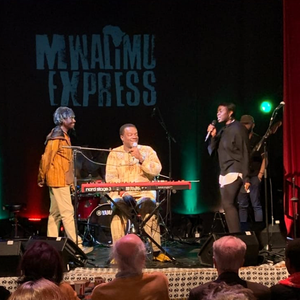 Ifang Bondi, meaning “be yourself” in Mandinka language, grew out of the former Gambian band called the Super Eagles. Founded in the 60’s the Super Eagles was the undisputed top group in the Gambia and Senegal. In 1968 they toured Ghana, making an enormous impact with their very African sound in a country which was shortly to produce Osibisa.

MANDA LY 3.02
Super Eagles
Viva Super eagles
Decca 1969 (single released in 1968)
The Super Eagles’ use of amplifiers, effects and electric keyboards to interpret African music laid the foundation for mbalax, which was popularised a decade later by Youssou N’Dour. In 1968, while touring all over the larger neighbouring country, the band earned acclaim as the top group in Senegal.
The same year they spread their pan-African influence even wider when they toured and recorded in Ghana. An eyewitness Papa Mensah , recalls the impression they made in Accra:
'The Tip-Toe Gardens, the venue for the group’s appearance was fully packed for a special big, live music performance with seven of the best big bands in the country, including the African Brothers and Uhuru Dance Band. It was the equivalent of America’s Night at the Apollo, with the Gambian band’s performance being the finale of the whole show. And when they finally stepped up to hit a note, their presentation of their latest, brand-new, all red Marshall amplifiers and other top range equipment, together with their stage costumes, one could sense the band meant real business.
'By the end of the second song, the fully packed dance floor was at a standstill. Awe struck audience, dancers and groovers had all been captivated by this band. Super Eagles were truly super. A bunch of highly talented Gambian musicians tight as a live unit that played a repertoire of all styles with unquestionable precision. I count myself one of the lucky ones at the time to have encountered the Super Eagles band from Gambia; a great African band that made a huge impact on countless swinging Ghanaian ravers and musicians alike.'
In Ghana they recorded several singles including this mega hit Mandal Ly which became a hit again in the 21st century at the hands of Africando.
*********************

Tata Din Din Jobarteh - The 21-stringed kora has been transformed into a modern vehicle of expression by Gambia-born Tata Dindin (born Ebraima Jobarteh). The oldest son of influential kora player Malamini Jobarteh, and the brother of modern kora player Pa Bobo, Dindin has continued to build on his family's legacy. While much of his repertoire consists of traditional tunes, Dindin has brought a fresh vision to his music. Inspired by the modern Yenyengo approach to the kora, he performs with an amplified kora that he built himself in an eight-piece, electric band, Salam. His stage show, which features him playing the kora with his teeth and behind his back, has led to him being dubbed "the Jimi Hendrix of the kora."
*********************

BAYEKE (Prace Remix)
Afriquoi
Time is A Gift Which We Share All The Time
Afriquoi.bandcamp.com (2020)

KASSAC ( SALAYKUM) 4.55
Musa Ngum Mundow
….(1953-2011) singer and songwriter who was very popular in Senegal and Gambia. He was one of the pioneers of mbalax music, and "helped to define the mbalax style of popular music in the Senegambia" and "had a strong influence on Youssou N'Dour and other mbalax pioneers". He was "something of a cult icon back in the Senegambia region, and a pioneer of the mbalax fusion style"] The mbalax, which originated from the Serer religious and ultra–conservative njuup music tradition sang during Ndut rites by circumcised boys (also referred to as “Kassak” songs) was the foundation of Ngum's music career. He mastered many of the njuup classics and built a name for himself whilst at the same time developing his voice
https://www.youtube.com/watch?v=K5MneXVvedM